Note to future self: Don’t get haircut the week before important events take place.

After my last day of work at GeoEye, I went to get my haircut at a nearby salon. I asked for it a little shorter. Between the time I gave this brief instruction, and the time she lifted her hands to my head, a seismic, cosmic, interrupting event took place that transformed my words into: “Kindly shave my head, I have no need of hair. Please don’t ask for confirmation.”

At least, that’s what I assume happened. Before I could say anything, an electric razor had taken quite a bit off the top. It wasn’t to the skin–thank goodness. But I was on my way to a whole new look.

It was too late to fix it, so I went with it.

The next day we flew out to Seattle to look for housing with our new realtor. I had to excuse myself for looking like a skinhead.

Of course, the next Monday I started at Microsoft and had my badge picture taken. That one will be alive for a while…

And my drivers license…

The importance of measuring performance changes is a topic that has been covered by others smarter and more experienced than me, but I have a recent simple tale.

I’ve simplified the code quite a bit in order to demonstrate the issue. Suppose I have a wrapper around an image (it has many more attributes):

I had this and a view that loading about 2,700 of these into a customized ListView control at program startup. On a cold start (where none of the pictures were in the disk’s cache), it would take 27 seconds. Unacceptable.

My first thought was to load the pictures asynchronously. I wrapped Bitmap.FromFile() into a function and called it asynchronously. When it was done, it fired an event that percolated up to the top.

Well, I spent about 30 minutes implementing that and ran it–horrible. The list showed up immediately, but it was unusable. The problem? Dumping 2,700 items into the ThreadPool queue is a problem. It doesn’t create 2,700 threads, but it causes enough problems to not be a viable option.

Asynchronicity is still the answer, though. But it’s at a different level. Instead of loading the individual images asynchronously, I skipped loading the images when creating the list control and instead launched a thread to load all the images and update them when done. The list loads in under a second, and the pictures show up little by little after that.

Anybody who’s taken high school or college mathematics know how phenomenal exponential growth is. Even if the exponent is very, very small, it eventually adds up. With that in mind, look at this quick-and-dirty chart I made in Excel, plotting the growth in hard drive capacity over the years. [source: http://www.pcguide.com/ref/hdd/hist-c.html] 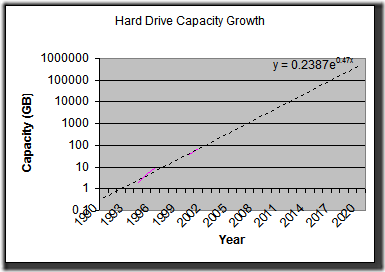 Also, this doesn’t really take into account multiple-hard drive storage schemes like NAS, RAID, etc. Right now, it’s quite easy to lash individual storage units together into packages such as those for more space, redundancy, etc. I’ll ignore that ability for now.

So 2020: that’s 12 years from now. We can expect to have a petabyte in our computers. That’s a LOT of space. Imagine the amount of data that can be stored. How about every book ever written? How about all your music, high-def DVDs, ripped with no lossy compression?

Tools such as Live Desktop and Google Desktop take on a whole new level of importance when faced with the task of cataloging petabytes of information on your home PC. Because, let’s face it, you’ll never delete anything. You’ll take thousands of pictures with your digital camera and never delete any of them. You’ll take hours of high-def footage and never watch or edit them, but you’ll want to find something in them (with automated voice recognition and image analysis, of course). Every e-mail you get  over your entire lifetime can be permanently archived.

What if you could get a catalog of every song ever recorded? That would probably require more than a few petabytes, even compressed, but we’re heading that way. I don’t think the amount of music in the world is increasing exponentially, is it? Applications like iTunes and Window Media Player, not to mention things like iPods, would have to have a critically-designed interface to handle the organization and searching for desired music. I think Windows Media Player 11 is incredible, but I don’t think it could handle more than about 100,000 songs without choking–has anyone approached any practical limits with it?

What about the total information in the world–that probably is increasing exponentially.  Will we eventually have enough storage so that everyone can have their own local, easily searchable copy of the vast sum of human knowledge and experience? (Ignoring the question of why we would want to)

How do the economics of digital goods change when you can have an infinite number of them? It’s the opposite of real estate, an ever-diminishing good.

On my home PC, for  the first time, I do have a lot of storage that isn’t being used. I have about 1 TB of storage, and about 300 GB free. I suppose I could rip all my DVDs, rip all my music at lossless compression (it’s currently all WMA / 192Kbps).

The rules of the game can change quickly when that much storage is available. It will be interesting to see what happens in the coming decades. Of course, all this discussion is completely ignoring the increasingly connected, networked world we live in.

OK, It’s a bit old now, but I thought I’d show myself on the cover of Wired magazine. Cool, isn’t it? This was part of a promotion by Xerox where they printed 5,000 (more?) custom covers. This was the July issue. I mostly like how we’re obviously on the water in the picture, but not according to the map. Cool, anyway. Definitely a keepsake. 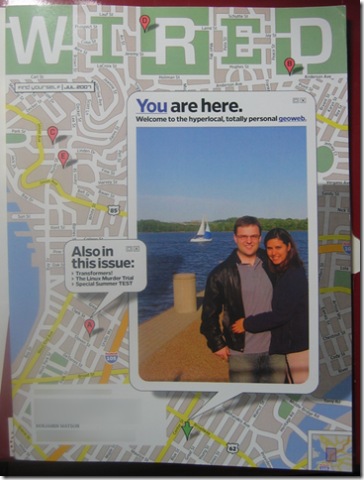