If you are having problems printing from Internet Explorer 7 under Windows Vista, check to see if you have AVG 8.0 installed. If so, get the latest version from http://free.grisoft.com. I did have build 8.0.101 and upgraded to build 8.0.138–everything works fine now.

I’ve also seen reports that it could be an error while running IE7 in Protected Mode. There’s a thread in the Microsoft forums about this.

You’ve installed Visual Studio 2005 on Vista and dutifully changed it to run as administrator, like you’re supposed to. And then…

Solution: Change them to open with Visual Studio 2005 directly instead of the vslauncher.exe (which opens up the solution with the correct version of Visual Studio if you have more than one).

Caveat: Only makes sense if  you use only Visual Studio 2005. 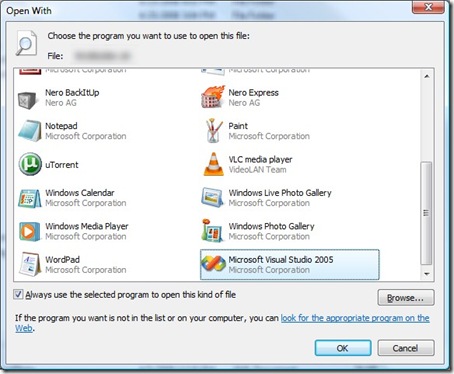 Now your solutions will load Visual Studio, bring up the UAC prompt, and it all works great.

Found via here and here.

I installed Windows Vista Service Pack 1 this morning. It took about 45 minutes, two reboots, and afterward I had no problems. It never showed up in Windows Update for me so I used the standalone installer (linked to above), fully prepared to reinstall some drivers. But afterwards, no drivers seemed to have any problems–Device Manager didn’t show any issues. So all is well and good.

Over at Slashdot, Fedora Project Leader Max Spevack responds to some frank question about the Fedora project.

He talks about a number of topics:

What his article demontrates to me is that Linux is going through some growing pains and that the community is realizing the difficulties that Apple and Microsoft have already dealt with in their own ways.

I guess the “problem” with package managers is that they are so integral to the rest of a distro that it’s a major endeavor to switch them. One reason is that a switch of that kind would break the upgrade chain.

Welcome to the real world of computing. Upgrading, advancing, improving are all important issues for real users using their computers. The only reason we still use the x86 architecture is backward compatibility. The only reason Windows has universal marketshare is that it works with basically everything ever written.

In terms of getting people to use Linux instead of proprietary operating systems — I think that battle is best fought in the world of people who are new to computers. People will tend to be loyal to the first thing that *just works* and doesn’t cause them pain. Making that first experience for people a Linux one as opposed to a proprietary one — that’s the challenge.

How true. It’s been a while since I’ve installed Linux, but my memories of it were not all that pleasant. It worked well enough, I suppose, but it certainly isn’t as polished or streamlined as it should be. MS and Apple are still years ahead of Linux in this regard.