This strike is a big deal, but it’s much bigger deal for Hollywood, the producers and writers than for the rest of us. I think they are facing some specific dangers that they had better think about before they drag on too long. The actual points the union and producers are arguing about are probably valid, some on both sides, but whatever–that’s irrelevant for my point. For the viewing public–I don’t think we’ll notice or care as much.

I’m thinking about hockey–they used to be the #4 sport, then they had a strike. Now, more people watch POKER on ESPN than hockey.

And airlines–when their workers go on strike, I think it definitely hurts the airline as a whole, because in the end we the people don’t get our service. We choose something else. And we might not come back.

I think Hollywood needs to examine some facts: TV viewership is going down, way down. There are only a handful of shows that really do well. The 90% of the others will be what’s hurt by this strike. People will come back to Leno, the Daily Show, The Office, and the Simpsons, etc. The other ones are in danger. TV has very stiff competition from the Internet, DVDs, video games (video game industry is MUCH larger than Hollywood), satellite radio, YouTube, ipods, and tons of other little distractions. Sure, lots of online content is derived from traditional content, which comes from Hollywood, but much of it is user-generated or at least independent. If TV goes out, it’s so easy for people to find other avenues for entertainment. I wonder if the same writers that are striking will lose their jobs a week after they get back to work when their shows are canceled because nobody’s watching them anymore. (Of course, they’ll just move on to the next project, but it’s still disruptive.)

I’m also curious (with any union)–how many of the members are really happy with how the union does things. I really don’t have any idea–but at some point a union might not be the best way to do business, especially in today’s global economy.

The strike by itself isn’t anywhere close to enough to doom the TV/movie industry, but put together with all of these other forces, they could be in real trouble. Meanwhile, we’ll just look for the next big star on YouTube rather than Hollywood… (more people watch Ask a Ninja than some TV shows, after all)

If you haven’t seen this by now, you really need to check it out.

Simpsonize Me – upload a photo of yourself and it will analyze it and generate a Simpson-ish lookalike. Very cool, and a big time waster. 🙂

Update: here’s mine. Should have put it up earlier… 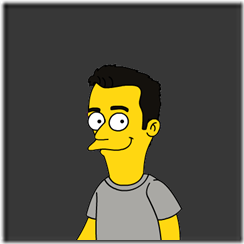